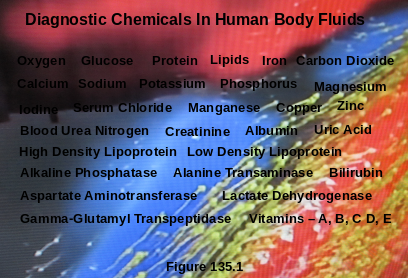 The construction of the human body is based on a primordial equilibrium (an initial health state). The human body is mostly fluids. Consequently, human body fluids play important roles in the determination of human health.

The math:
Pj Problem of Interest is of type Containership (Density). The amount of diagnostic chemicals in human body fluids is the measurement of interest and is often expressed as mass/volume (density).

The ICF is the fluid found in the cells of the body (about 22L in an apparently healthy adult).

The ECF is the fluid found outside the cells of the body and it includes intravascular fluid (plasma), interstitial fluid, lymph, fluid in bones, fluid in dense connective tissues like cartilage, cerebrospinal fluid, intraocular fluid, digestive juices, serous fluid (intrapleural, pericardial and peritoneal fluid), synovial fluid in joints and fluid in the urinary tract.

Creatinine
Normal range:
Male: 0.7 to 1.4 mg/dl
Female: 0.4 to 1.2 mg/dl
Creatinine is a non protein nitrogenous waste product that is formed from the metabolism of creatine in the skeletal muscles. Creatine is a molecule of major importance for energy production in muscles. It is synthesized primarily in the liver and transported to the muscles where it is converted to creatinine. Creatinine diffuses freely into the extracellular fluid (ECF). The kidneys then filter the creatinine from the ECF and excrete it in the urine. The excretion of creatinine is relatively constant in the absence of disease, and it is proportional to an individual's muscle mass.

Measurement of serum or plasma creatinine concentration is used to determine the sufficiency of kidney function, the severity of kidney damage and to monitor the progression of kidney disease.

Uric acid
Normal range:
Male: 3.5 to 7.2 mg/dL
Female: 2.6 to 6.0 mg/dL
Uric acid is the final product resulting from the catabolism of purine. Purines such as adenosine and guanine result from the breakdown of nucleic acids or from the destruction of tissue cells, and are converted primarily in the liver into uric acid. From the liver, the uric acid is transported in the plasma to the kidney, where it is filtered by the glomerulus into the renal tubules. About 98% to 100% of the filtered uric acid is reabsorbed in the proximal tubules, and small amount of the uric acid is secreted by the distal tubules into the urine. Renal excretion accounts for about 70% of uric acid elimination, the remainder is excreted through the gastrointestinal tract (GIT).

Uric acid is measured to assess inherited disorders of purine metabolism, to confirm diagnosis and monitor treatment of gout, to assist in the diagnosis of renal calculi, to prevent uric acid nephropathy during chemotherapeutic treatment, and to detect kidney dysfunction.

Blood Urea Nitrogen (BUN). Normal range: 7 - 20 mg/dL
Blood Urea Nitrogen is a measure of the amount of urea nitrogen in the blood. Nitrogen in the form of ammonia (NH3) is a by product of the breakdown of non-storable protein into amino acids in the liver. Since ammonia is toxic, the liver converts it into urea [(NH2)2CO]. The blood transports urea from the liver to the kidney where it is filtered and flushed from the body.
Elevated BUN may suggest kidney malfunction.

Albumin. Normal range: 3.9 - 5.0 g/dL.
Albumin is a small protein made in the liver. Albumin is the most abundant protein in blood serum and it helps in nourishing tissues and the transport of hydrophobic substances (hormones, fats, etc). Albumin plays an important role in the maintenance of colloid osmotic pressure at the venule ends of capillaries. Capillary presure causes fluid and dissolved substances to move from the

In general, when a beam of incident light of intensity Io passes through a solution, a part of the incident light is reflected Ir, a part is absorbed Ia and the rest is transmitted It.
So, Io = Ir + Ia + It.