Bit View Of The Universal Product Code - The PjProblemStrings 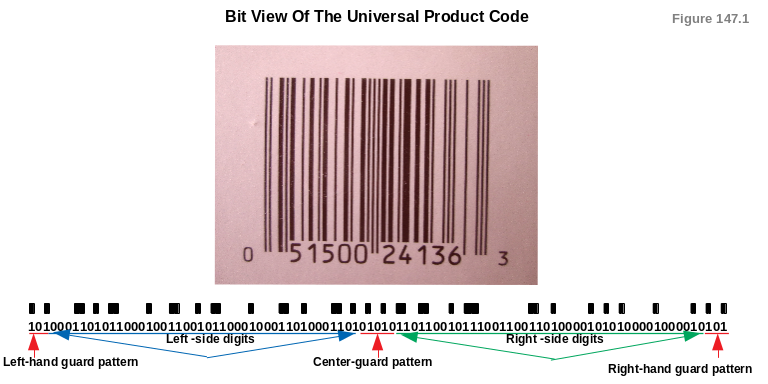 The Universal Product Code (UPC, also called UPC-A and UPC barcode) is on almost all products in any modern retail store. The UPC is a consumer product identifier. It was introduced in 1974 by GS1 (a not-for-profit organization that develops and maintains standards for business communication) to improve the efficiency of the check-out process, inventory management and supply chain logistics.

The math:
Pj Problems of Interest is of type identity.

(b) Ideally, only the decimal number system language should be needed. However, the computation of the scanning technology needed to recognize just the decimal numbers (optical character recognition) is more complicated and less reliable.

(c) PjProblemString of Interest: S7P2A21 (physical identity). This identity consists of 12 decimal numbers (6 from the left side and 6 from the right side) derived from 84 strings of bits where 7 bits made up a decimal number. 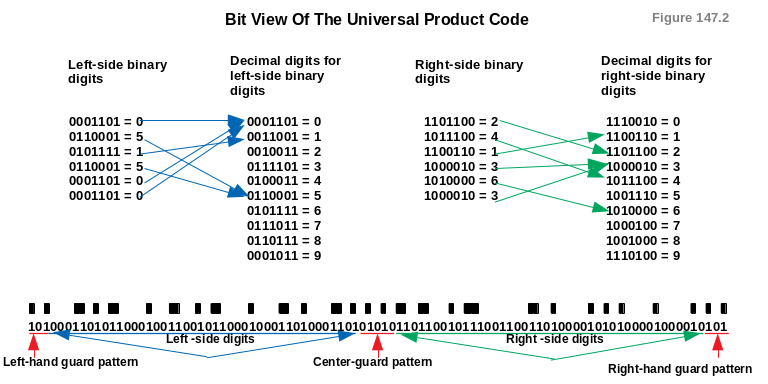 The UPC can be scanned in both directions. The computer knows the scanning direction by interpreting the parity of the first seven binary digits scanned. Odd parity implies scanning is left to right and the left-hand side mapping of binary to decimal table (figure 147.2) is used. Even parity implies scanning is right to left and the right-hand side mapping of binary to decimal table is used.

The price of a product is not part of a UPC. Product price is fetched from company's database. Also, an employee at checkout can type in the twelve decimal digits of the UPC if for some unexpected reasons, the scanner can not read the UPC.