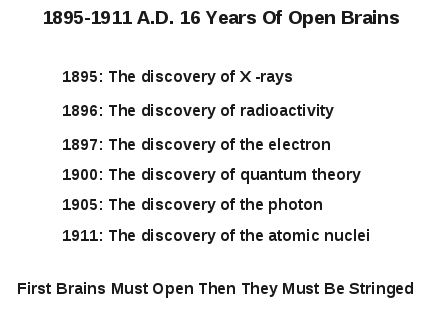 The human story is primarily about survival and discoveries. Many persons young and old from various parts of the world have been contributors to the important story of great human discoveries. The discoveries indicated in 1895-1911. 16 years of open brains are important snapshots from the human Knowledge Continuum.

(a) Indicate the discoverers and primary underlying concepts of the discoveries highlighted in 1895-1911. 16 years of open brains.
(b) What is meant by open brain and stringed brain?

(a)
(i) 1895: X-rays were discovered. Wilhelm Konrad Rontgen (1845-1923) is credited with the discovery. The underlying concept is that light invisible to the unaided eye, could penerate matter that is impervious to ordinary light and could produce fluorescence in various substances.
(ii) 1896: radioactivity was discovered. Henri Becquerel (1852-1908) is credited with the discovery. The underlying concept is that energy and matter can be released as a result of changes in the nucleus of an atom. Becquerel used Uranium in his experiment. In the same year, Marie Sklodowska Curie (1867-1934) in association with her husband Pierre Curie (1859-1906) showed that some other substances other than uranium are radioactive. The two substances they found to be radioactive they named polonium and radium.
(iii) 1897: the electron was discovered. G. Johnstone Stoney (1826-1911) is credited with being the first to suggest (in 1874) the existence of charged discrete units of electricity associated with atoms. In 1891 Stoney suggested the name electron for this discrete unit of electricity. However, Joseph John Thomson (1856-1940) is credited with the discovery of the actual existence of the electron and some of its properties. Electrons are central to all interactions in the physical universe.
(iv) 1899: α radiation β radiation were discovered. Ernest Rutherford (1871-1937) is credited with the discovery. Paul Villard (1860-1934) discovered Gamma (γ) radiation, shortly after. These discoveries identified the nature of the radiation from uranium. Rutherford showed that α rays are positive parts of helium atoms moving at high speed. β rays are electrons moving at high speed. γ rays are short wavelength rays similar to visible light.
(v) 1900: Quantum Theory was discovered. Max Planck (1858-1947) is credited with the discovery. Over the years, several great individuals set the stage for its heralding: Isaac Newton's wave theory of light and the light particles he called corpuscles; the wave theory of light of Christian Huygens (1629-1695), Augustine Jean Fresnel (1788-1827) and Thomas Young (1773-1829); James Clerk Maxwell's wave equation and the confirmatory experiment by Heinrich Hertz (1857-1894). The underlying concept is that energy is transfered in discrete units called quanta.
(vi) 1905: photon (light quanta) was discovered. Albert Einstein is credited with this discovery. The discovery established the particle nature of light that arose from the theory of photoelectric effect. Einstein established the photoelectric equation which states that the energy of the light quantum is the sum of the energy required to remove the electron from the metal and the kinetic energy imparted to the electron.
(vii) 1911: atomic nuclei were discovered. Ernest Rutherford (1871-1937) is credited with the discovery. Rutherford's interpretation in 1911 of his experiment on the scattering of alpha rays by a thin sheet of mica and a similar experiment by H. Geiger and E. Marsden on the scattering of alpha rays by gold foil, established the discovery. Rutherford's interpretation posited that the results of the experiments showed that most of the mass of an atom is concentrated in a single particle that is very small relative to the atom itself. This particle we now know as the nucleus of an atom.

1895 -1911. 16 years in which open brains established discoveries that were critical intellectual prerequisites for the actualization of the quantum intellectual leap of homo sapiens sapiens.