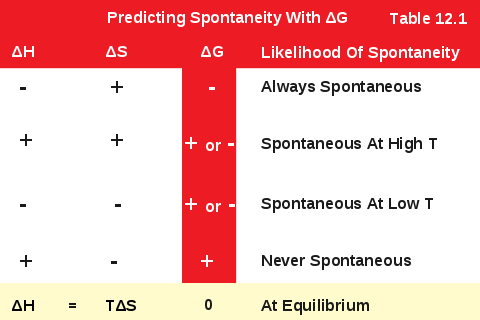 (a) Rudolph Clausius, was one of the primary pioneers of classical thermodynamics. The others were Sadi Carnot, James Prescott Joule, Benoit Claperyon, James Clerk Maxwell and William Thomson (Lord Kelvin). Clausius coined the term entropy which is a measure of the disorder of a system. The letter S is used to denote entropy.
Clausius mathematical definition of entropy:

S = Q/T --------(1).
Where S is entropy of system; Q is heat content of system and T is temperature (degree Kelvin). Clausius assumed thermodynamic equilibrium as a result T is constant and the following equation holds:

ΔU-Δw
Therefore, equation (2) can be restated as:

So, ΔG = ΔH - TΔS ------(5)
Where ΔG is change in Gibbs free energy; ΔH, is the change in enthalpy; ΔS is change entropy; and T is temperature (degree Kelvin).
The states of ΔH, ΔS and ΔG relative to reaction spontaneity is shown in table 12.1.

Where E is the voltage of a voltaic cell at other than standard conditions; Eo is the voltage of the voltaic cell at standard conditions; R is the universal gas constant, T is absolute temprature (degrees Kelvin); Keq is equilibrium constant; n is the number of electrons transfered in the balanced equation of the reaction taking place in the cell; and F is the value of the conversion factor from volts to joules per mole (96,485).

Gibbs free energy is related to standard cell potentials and equilibrium constants. So, any of them can be used as a predictor of reaction spontaneity.
A reaction tends to be spontaneous if Keq is significantly larger than 1, if Eo is positive , and if ΔG is less than zero.

(e) The chemical reaction for the combustion of 2 moles of hydrogen gas is as follows:
2H2(g) + O2(g) -------> 2H2O(g).
This reaction indicates a decrease in entropy since two gas molecules are formed from three gas molecules.
However, ΔG is negative, because of the large negative value of the change in enthalpy (ΔH) relative to + TΔS. Hence the reaction is spontaneous.

(f) Ludwig Boltzmann was one of the primary pioneers of statistical mechanics applied to molecular theory.
Boltzmann mathematical definition of entropy: