Work Done By Friction In Stopping A Moving Object

A luggage weighing 490 lbs is being moved on a horizontal conveyor belt at 6 miles per hour. The conveyor is then brought to an abrupt stop. The luggage then slided for 1.37 secs during which time it covered 6 feet before coming to a complete stop.
(a) Calculate the work done by friction in bringing the luggage to a complete stop. The coefficient of friction between conveyor belt and luggage is 0.2.
(b) Confirm that the distance covered during the slide and the duration of the slide are 6 feet and 1.37 secs respectively. 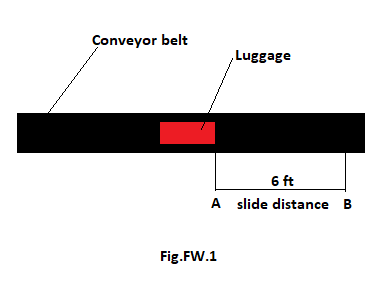