Inter Atomic Force As A Function Of Nucleic Spacing 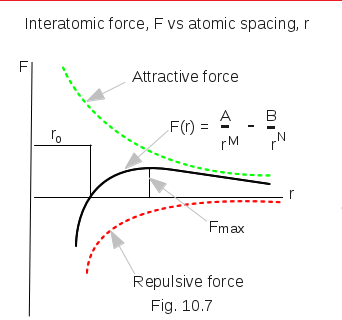 The bonding force F, between atoms may be expressed approximately as follows:

(a) Express the equilibrium spacing r0 in terms of A, B, M, and N.
(b) Derive another form for F(r) in which the only constants are r0, A, M, and N.
(c) From the equation for F(r) derived in (b) calculate the following:
(i) The spacing r1 for which F is maximum
(ii) The value of the maximum force Fmax.

Pj Problem of Interest is of type force (electrostatic). Problem is primarily of type force since interatomic force underlies problems (a), (b) and (c).

So, The spacing r1, for which F is maximum:

The attractive forces in interatomic bonds are primarily electrostatic. So, the expression A/rM for the attractive force is usually assumed to be the same as the forces between electric charges. Consequently, Coulomb's Law applies and the force is inversely proportional to the square of the spacing. So M is usually = 2. The value of N is more dependent on the type of bond. For metallic bonds, N ranges from 7 to 10. For ionic and covalent bond, N ranges from 10 to 12.