Potential Energy Between Atoms As A Function Of Nucleic Spacing 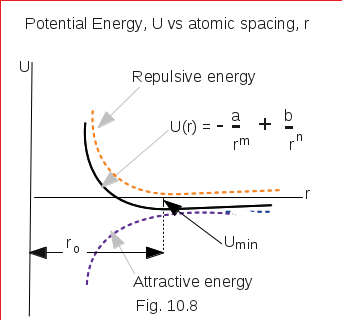 The bonding force F, between atoms may be expressed approximately as follows:

In general, the potential energy, U(r) between atoms is defined as the work capacity of interatomic forces for a given reference frame.

(a) Determine the expression for U(r) by integrating equation (2).
(b) Show that the curve U(r) in figure 10.8 has a minimum at equilibrium spacing, r0.
(c) What is the significance of U(ro)?
(d) Explain the meaning of the area under the curve U(r) from r0 to infinity.

Pj Problem of Interest is of type force (electrostatic). Energy is the capacity for work. It is force that is the doer of the work. So energy and work problems are of type force.