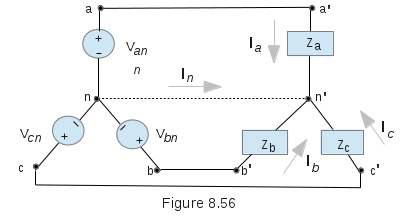 Figure 8.56 is a Wye (or Y) configuration of a Balanced three phase AC circuit. Show that:
(a) The magnitude of the line voltages is equal to √3 times the magnitude of the phase voltages.
(b) No conducting wire is needed to connect nodes n and n'.
(c) If the 3 balanced load impedances are replaced with 3 equal resistances R, the total instantaneous power delivered to the balanced load by the 3-phase generator is constant.

Pj Problem of interest is of type force. Power and energy problems are force problems
Three-phase power is a configuration of three sinusoidal voltages that are generated out of phase with each other. It came about as a result of the need to improve the efficiency of single phase power delivery. some of its advantages include:
(1) Delivery of steady constant supply of power. A single phase delivery is pulsating.
(2) Reduced transmission losses over long distances.
(3) Efficient use of conductors and circuit components
(4) Nonzero starting torque (moment of a force) for three-phase motors.
Balanced voltages implies that the voltages have equal amplitude and frequency and are out of phase by 120 degrees.
So, the phase voltages of Van, Vbn and Vcn in phasor form are:
Van = Van<0o
Vbn = Vbn<-(120)o
Vcn = Vcn<-(240)o = Vcn<120o
Sum of phase voltages equal zero. That is:
Van + Vbn + Vcn = 0.
Voltage amplitudes, V are rms values,
(a) The line voltages (or line-line-voltages) in figure 8.56 are:
Voltages between lines aa' and bb'
Voltages between lines aa' and cc'
Voltages between lines bb' and cc'.