X and Y are amino acids, Z is an amino acid sequence.
(a) What is an amino acid?
(b) What is a protein?
(c) Identify X and Y of figure 7.
(d) Given that the space of interest is the human body, and based on the identities you established in (c), describe the reaction X + Y -------> Z of figure 7. Thus establish the PjProblemStrings Sequences of Amino Acids.
(e) What is the relationship between genes and amino acids?
(f) List the 20 amino acids found in most proteins.
(g) List the ten essential amino acids. Which of these amino acids can be produced in the body?
(h) Are all the 20 amino acids found in the body compounds of only carbon, hydrogen, nitrogen and oxygen?
(i) What distinguishes one protein from another?
(j) List some fundamental and important functions of proteins.

(a) An amino acid is an organic molecule that contains an amine group (-NH2) and a carboxylic acid group (-COOH). The following is the general form of the amino acids found in most proteins: 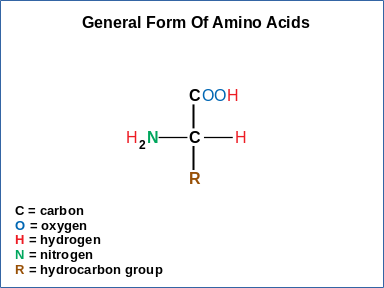 The general form of amino acids consits of three different groups and an hydrogen atom bonded to a central carbon atom. The groups are the carboxylic acid group (-COOH), the amine group (-H2N) and the R group which is a hydrocarbon group or hydrocarbon derivative. The R group distinguishes one amino acid from another. The R group is called the amino acid side chain because they hang off the side of the main chain of atoms of a protein molecule. There are four basic side chain types: polar, nonpolar, acidic and alkaline. These side chain properties play important roles in the spatial orientation of protein molecules.

(e) A gene (a region of DNA that encodes one function) encodes an amino acid sequence (a protein).

(g) Isoleucine (Ile), Leucine (Leu), Lysine (Lys), Methionine (Met), Phenylalanine (Phe), Threonine (Thr), Tryptophan (Trp), Valine (Val), Histidine (His, essential in infants), and Arginine (Arg, enssential in growing children but not in adults). None of these amino acids can be produced in the body they must be supplied from food protein.

(j) Important functions of proteins:
Catalysis: many enzymes that act as catalysts in biochemical reactions are protein molecules.
Transport: many molecular transporters are proteins. For example, lipoproteins transport cholesterol and fats in the blood.
Structural support: proteins in skin and bone provide structural support
Movement: muscle tissue in animals is composed of proteins.