Electric Circuit Of A Lab Power Supply - The PjProblemStrings 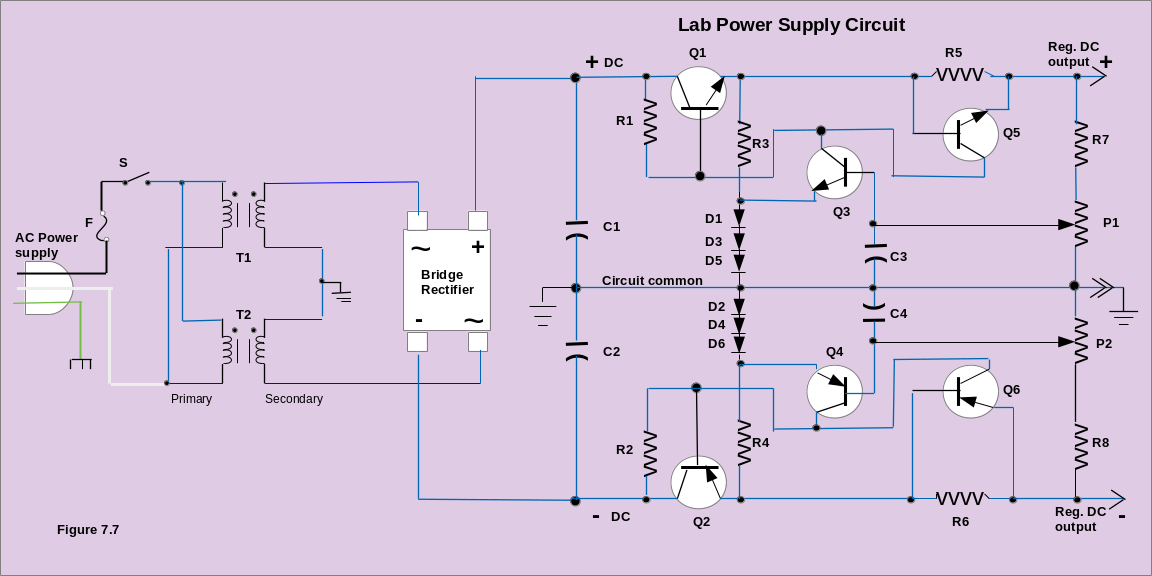 The electron is existentially indispensable. It is at the heart of chemical reactions; and the electrical energy that propelled humans into their unique technological sphere of influence. The electron will also play a fundamental role in homo -sapiens series' journey towards infinite intelligence.

Figure 7.7 is an electric circuit of a lab power supply put together in the TECTechnics Lab. Space of interest : S7P1A13 (1' by 1' by 4" container)
(a) Define: (i) electricity (ii) voltage (iii) resistance (iv) electric circuit.
(b) Identify the components of the circuit and their respective functions in the circuit.
(c) What are the three primary stages of the circuit? What are the PjProblem Strings associated with each of the stages? Thus establish the PjProblem String Sequences of the lab power supply.

(ai) Electricity is charge in motion. There are two types of charges: positve (+) charge and negative (-) charge. The unit of measurement of charge is the Coulomb (named after Charles A, Coulomb). In the context of electricity, the charge in motion that is of primary interest is the electron (negative charge, -e = -1.602 x 10-19 C). In particular, the motion of valence electrons of metals called conductors. For example, copper (about 8.5 x 1028 electrons per cubic meter are free to move) and silver are good conductors. In electronics, the concept of holes as positive charges in motion is also of interest. The motion of charge is current. The unit of measurement of current is the Ampere (named after Andre Marie Ampere) and its symbol is i. When the current is a function of time it is represented by i(t).
Technically, i = dq/dt (rate of change of charge with respect to time). In other words, 1 ampere is equal to 1 coulomb of charge moving through a fixed surface in 1 second. There are two types of current: direct current (DC) which flows in one direction; and alternating current (AC) which reverses polarity periodically.
(ii) Voltage is the electromotive force (emf) that moves charges from one point to another in an electric circuit. Voltage is also called potential difference. In other words, an electric energy with the capacity to do work under appropriate conditions. This energy is a consequence of the charge fields (electrostatic fields) of charges which exert attractive and repulsive forces. When one charge differs from another a potential difference is established between them. Electromotive force is the sum of potential differences in an electrostatic field. The unit of measeurement of voltage is the volt (named after Alessandro Volta). Consider points a and b in an electric field. If 1 joule of work is done in moving 1 coulomb of charge from a to b, then point b is at a potential difference of 1 volt with respect to a. In other words, the voltage or potential difference between two points in a circuit is the work done in moving charge from one point to the other.
(iii) Resistance is opposition to current flow. The material opposing the current is called a resistor. The unit of measurement of resistances is the ohm (named after Georg Simon Ohm). Ohm's Law relates voltage, current and resistance as follows:
voltage = current x resistance
(iv) Electric circuit is a current conducting network of connected electrical/electronic components that are being supplied by at least one voltage source. Any branch of an electric circuit is open (no current flows through it) if there is discontinuity in the contections of the branch (a branch is any portion of a circuit with two terminals connected to it). The branch is closed (current flows through it) if the connections are continuous. A short circuit implies zero resistance to current flow and therefore infinite current flow.