Energy In A Mole Of A Crystalline Solid 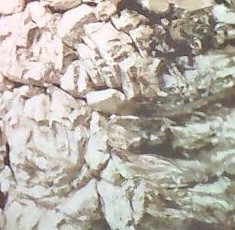 The above photo is of a sample of crystalline scandium (Sc, atomic number 21).
The atoms and molecules of a solid are in constant motion at ordinary temperatures eventhough there is equilibrium spacing between them. Thermal agitation due to heat causes the atoms and molecules to oscillate about their equilibrium positions oftentimes at very high frequency. The resulting kinetic energy acquired by the atoms and molecules constitute the thermal energy of the substance.
Consequently, both kinetic energy (thermal) and potential energy (structure) consitute the total energy in solids and liquids (this potential energy is not in gases).

(a) Suppose an individual atom of a crystalline solid behaves as a point mass. Calculate the total energy of the atom at 25oC.

(b) Calculate the total energy in one mole of the crystalline solid 25oC.

Pj Problem of Interest is of type force. Energy is the capacity for work. It is force that is the doer of the work. So energy and work problems are of type force. In this instance, the total energy consists of kinetic energy and potential energy about 50-50. The kinetic energy is due to atom collissions (more of a force-push), the potential energy is more of a force-pull. So either categorization is appropriate. force-push is selected here because of the influence of temperature.

Energy = 3RT is approximately correct for many materials at ordinary temperatures. It is not correct at low temperatures.