Gears are simple machines. They are used to change the direction of motion; decrease or increase the speed of motion; and magnify or reduce applied force.

(a) Figure 133.1(a) is an illustration of an eggbeater. Gears A, B and C enable the eggbeater to do its work. Physicists say, the gear is a type of a lever. Classify the eggbeater as a lever.
(b) Give a range for the theoretical mechanical advantage of the eggbeater of 133.1(a).
(c) Explain how the gears of the eggbeater change the speed of motion.
(d) Figure 133.1(b) is a rack-and-pinion arrangement of gears. What is its usefulness.
(e) Imagine a gear train consisting of four gears: A (10 teeth), B (40 teeth) C (20 teeth) and D (10 teeth). A in mesh with B, C is rigidly fixed on the same shaft as B; C in mesh with D. What is the overall speed ratio of the gear train?
(f) What is an idler gear?
(g) Write the PjProblemStrings at play with respect to figures 133.1(a) and 133.1(b).

The math:
Pj Problem of Interest is of type force (push).

(a) The eggbeater is a third class lever. Effort is between resistance and fulcrum and effort applied is greater than resistance inorder to increase speed.

(c) Gear A has 32 teeth; gear B has 8 teeth and gear C has 8 teeth.
So, there are four complete revolutions of B to one revolution of A.
So, C also revolves four times since it has the same number of teeth with B.

(d) A pinion is the smaller of two gears meshed together. In other words, of the two gears, the pinion has fewer teeth. A rack-and-pinion gear arrangement is used to change rotary motion to linear motion. 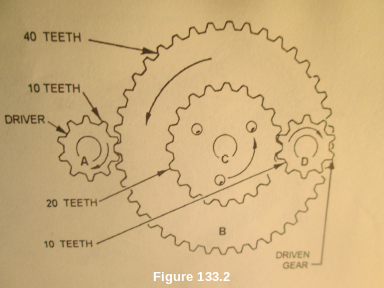 (f) Two external gears that are meshed rotate in opposite directions. An idler is a third gear placed between the two gears to make them rotate in the same direction (figure 133.3). The idler does not change the gear ratio in speed calculation. 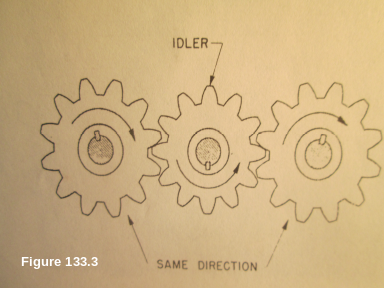