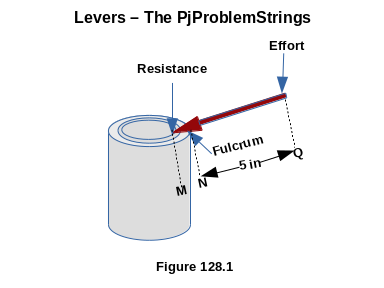 Levers are simple machines. Figure 128.1 illustrates a 6-inch file scraper (brown) being used to pry up the lid of a can.

(a) Name the other types of simple machines.
(b) What type of lever is the file scraper illustrated in figure 128.1?
(c) The blue arrows associated with the file scraper are
implicitly PjProblemStrings. Make them explicit.
(d) What is the mechanical advantage of the file scraper,
given that MN is 1 inch and NQ is 5 inches?

The math:
Pj Problem of Interest is of type force (push/pull).

So, the file scraper illustrated in figure 128.1 is a first class lever.

(c) Assuming a multi-matter-multi-dynamic space (S7) because of the dynamism of atoms of materials and the fact that there are several matter in the space.
Both the resistance and effort arrows are linearly directed forces (push).
So, the PjProblemStrings S7P3A32 and S7P4A41 are implied.
There is static equilibrium at the fulcrum
So, the PjProblemString (S7P7A71) is implied.

(d) Mechanical Advantage is essentially the gain in effort or the loss in effort. In other words, gain in effort implies the Resistance overcomed is greater than the Effort applied while loss in effort implies the Resistance overcomed is less than the Effort applied.
Mathematical equation for Mechanical Advantage (M.A):
M.A = Reistance/Effort = L/l
Where L = length of effort arm (NQ)
l = length of resistance arm (MN).