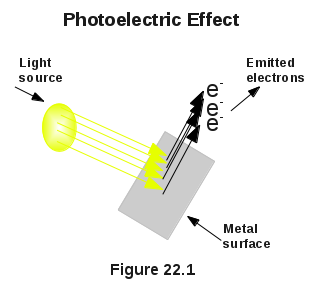 (b) A 0.01 Watts beam of light with wavelength 6500 Å (angstrom) which strikes a photoelectric cell is completely used in the production of photoelectrons. Determine the magnitude of the current that flows in the circuit of the photoelectric cell.

(c) What retarding potential would be required to stop the flow of photoelectrons in a photoelectric cell with sodium metal illuminated by light with wavelength of 325 nm, if 3.06 x 10-19 J is used to remove the electron from the metal?

The Einstein Photoelectric Equation states that part of the energy of one quantum of light is used to remove the electron from the metal and the remainder is used to impart the electron with kinetic energy: