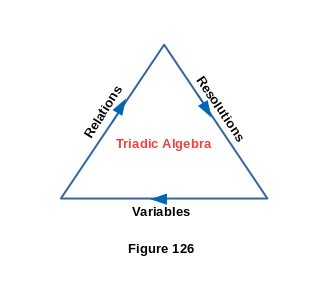 The term Algebra was derived from Al-Jabr wal-Muqobalah:
The Compedious Book Of Calculation By Completion And Balancing
written by the great mathematician Mohammed ibn Musa al-Khowarizmi (A.D. 780 - 850).

The math:
All Pj Problems are at play:
identity, force, motion, change, grouping/interaction and equilibrium.

Firstly, the keen observer observes the containership of a space: is it empty or occupied and what are its dimensions? Secondly, the observer observes the dynamism (changes) of the space. The changes imply the variabilities of the space. It is these variabilities that birthed the concept of variables. As a result of their observations and experiences with the physical universe, mathematicians have formulated various abstract spaces and abstract occupants of the spaces. For example, set theory is an example of such spaces. In the final analysis, the primary problems of interest in a real or abstract space are problems about the nature of its emptiness or its occupancies. The space in focus here is (S7).

Consider an arbitrary space of type S7 (multi-matter and multi-dynamic). This type of space has various occupancies and dynamism. For example, a country is of type S7. Mathematicians use letters to arbitrarily represent anything that changes. These letters are called variables. Any word can be established as a variable. However, the use of letters is customary. So, we can let X be a collection of residents of S7. We can be more specific by letting X be a collection of female residents in S7. The assignment of a population space to a variable establishes the domain of the variable. It is from this domain specific values of the variable must come from. In set language, these values are called elements or members of the domain of the variable.

(bii) Relations
Natural and man-made rules exist in mathematical spaces. The connections these rules establish between variables constitute the relations in the space.

Consider figure 127 which illustrates generally known relations: relations between parents and children, relations between siblings and relations between spouses or partners. The connections are obvious in the diagram. However, the rules that established the connections are not obvious in the diagram. The rules that established the connections illustrated in figure 127 are natural biological processes that humans have defined and assigned terminologies. For example, the terms mother, father, son, daughter are man-made formulations from the language used to define the biologic process of conception and birth. It is often the case that natural processes in a mathematical space are defined by the cognitive beings in the space (humans in the case of earth). The concept of definitions of observable processes and their verifications birthed science.

(biii) Resolutions
Resolutions in the context of Triadic Algebra simply mean finding answers to the relations in mathematical spaces. The answers range from general properties of relations to specific values of the variables of relations. For example, the properties of the number line, trigonometry functions, logarithmic functions, exponential functions, polynomials, normal curves, etc were determined through resolutions. It is also through resolutions that the specific values of dependent variables in equations and inequalities are determined for given independent variables.