Time, Frequency And Complex Frequency Domains Of A Sinusoidal Excitation 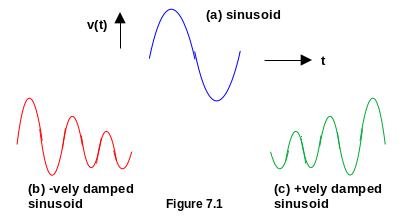 (a) General representation of a sinusoidal excitation in the time domain: v(t) = Acos(ωt + θ) -------(1)
Where A is the amplitude of the sinusoid; ω is the radian frequency (angular velocity) and θ is the phase angle.

General representation of a sinusoidal excitation in frequency domain: V(jω) = Aejθ = A<θ (phasor form) -------(2)
The frequency domain is also called the phasor domain. It is a mathematical space formulated for analytical simplicity. In other words there are no real phasor sinusoids. It should be remembered that the radian frequency ω is implicit in (2) even though it is not explicitly represented.

(b) Mathematical tools used to arrive at the general identities of sinusoidal excitations in the frequency and complex frequency domains are:

(c) Consider the complex exponential Aej(ωt + θ).
By Euler's Identity, Ae(jωt + θ) = Acos(ωt + θ) + jsin(ωt + θ)
So, v(t) = Acos(ωt + θ) = Re(Aej(ωt + θ)) = Re(Aejθejωt) -------(5)
Equation(5) indicates that the general representation of a sinusoid in the time domain can be represented by the real component of a complex vector having argument (angle) = (ωt + θ) and magnitude = peak amplitude of the sinusoid.
If the real notation (Re) and the complex exponential ejωt are removed from equation(5), we have equation (2), the complex phasor or frequency domain of v(t) = Acos(ωt + θ):
V(jω) = Aejθ = A<θ (phasor form). Phasors as previously noted, are mathematical formulations used to simplify analyses. Also the frequency component of equation(5) that was removed for simplification is not discarded. It is implicit in the phasor formulation 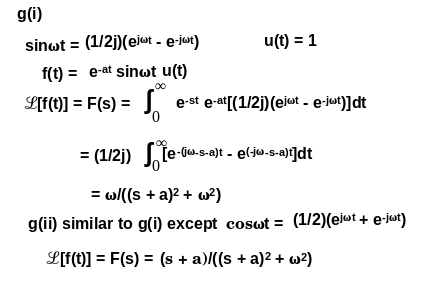