Total Force In Portions Of A Bar Under Axial Loading 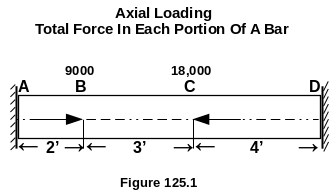 Figure 125.1 illustrates an axially loaded uniform bar that is rigidly fixed at its ends A and B. Axial loading is at points B and C.

(a) Determine the total force in portions AB, BC and CD of the bar. Assume consistent deformation and superposition.
(b) Interprete the result of problem (a) if the bar is not rigidly held at its ends A and D, but instead, prestressed by wedging it between rigid walls under an initial compression of 10,000 lb.
(c) What happens if the initial compression in problem (b) is less than 8000 lb?

The math:
Pj Problem of Interest is of type force (push). Tension and compression are at play. On the whole more compression than tension, hence compression (push) is chosen.

Consistent deformation implies, load is distributed in portions of the bar in inverse proportion to their respective lengths.
Superposition implies that total force in each portion is the algebraic sum of the forces imposed by the individual loads.
So, for load 9,000 lb:
(7/9)9000 = 7000 is carried in tension by part AB
(2/9)9000 = 2000 is carried in compression by part BD

Figure 123.1 illustrates Pascal's Principle which states that pressure applied to an enclosed