The Venn Diagram (named after John Venn who invented it), is a basic model generally used to group members of two or more different sets. In particular, it highlights unique groups of sets and the members common to the groups.
A probabilistic view of the Venn Diagram sees the Venn Diagram as an outcome space consisting of probable event spaces resulting from a random experiment. It is this view that is the focus here.

The strings: all PjProblems at play. 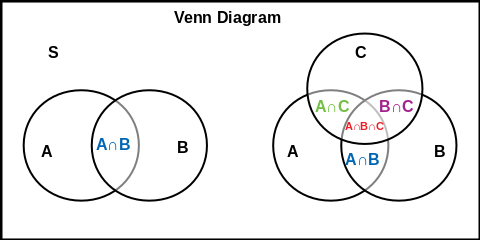 (ai) A random experiment is an experiment or trial characterized by short-term unpredictability of its outcomes; and long-term predictability of the relative frequency of its various outcomes after many trials. For example, consider the toss of a coin with two possible outcomes (Head/Tail). A toss of the coin is a trial. The outcome of the toss is not perfectly predictable in one trial. It could be a head, it could be a tail. However, after many tosses a regular pattern begins to emerge. The number of heads relative to the number of tosses (relative frequency) will begin to tend towards a fixed number. Ditto for the number of tails. In a fair coin, the relative frequency is 0.5 for each outcome. In other words, the outcomes of a random experiment are unpredictable in the short-term; but predictable in the long-term after many trials. The long term may or may not be synonymous with long-time. For example, one can carry out many tosses of a coin in a single day but not the accumulation of actual mortality.

(iii) An event is a subset of outcome space in the probabilistic sense or just an occurrence.

(b) Yes. There are happenings in it. However, whether the Universe is a consequence of a random experiment or of the executed plans of an intelligent Being, is a matter of one's belief system.

(c) No. It only has the potential to become an outcome space.

(d) The initial condition of the outcome space of a Venn Diagram was at some point in time an empty space.
Then, forces, motions, changes, groupings/interactions established its identity and dynamism as an outcome space.

(e) - Initial empty space, S7P1A22 (containership - area)
- Force establishes matter in space S7P3A32------->S7P1A15
S7P1A22S7P3A32S7P1A15... This sequence is the basic PjProblemStrings Sequence of all Venn Spaces. The additional PjProblemStrings that extend the sequence depend on the nature of the particular forces, motions, changes and groupings/interactions that established the identity and dynamism of the outcome space of a given Venn Diagram.

(f) This is a probability problem. Methods used to solve probability problems are based on probability axioms and theories. The theories of probability are broadly grouped into:
- The equally likely outomes theory: each member of an outcome space has equal chance of occurence.
- The relative frequency theory: chance of occurence of a member of an outcome space tends towards a limit after many repeated trials.
- The subjective theory: chance of ocurrence is subjectively derived from indirect data that are not results from repeated trials. For example, prediction of an earthquake in space X 30 years into the future is not based on many repeated trials of actual earthquakes.

(g) Yes. However, the illustration will be visually complex.