The Law Of Reflection Of Light 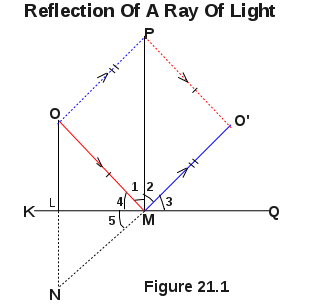 (a) Prove the law of reflection of light which states that the angle of incidence of a ray of light is equal to the angle of reflection.
(b) Indicate the position of the mirror image of a point O (figure 21.1) which is in front of a plane mirror.

The math:
Pj Problem of Interest is of type motion (linear). The ray model of light implies linear motion of light.