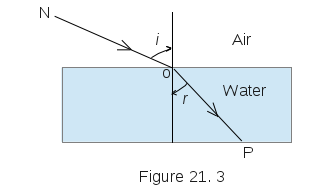 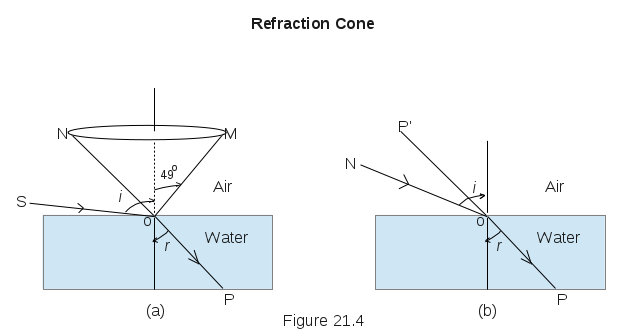 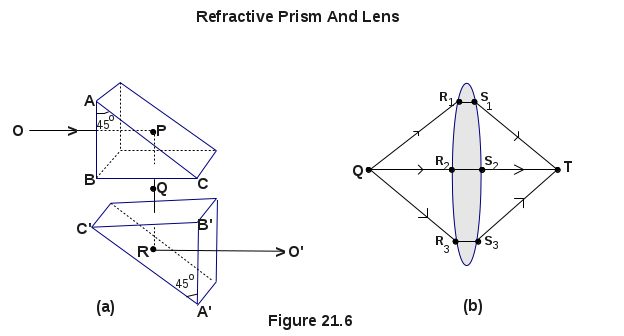 Its Tee again! "Mom, check out my periscope", said Tee a sharp 7 year old. "Interesting! So what concept did you use?" Asked her mom. "Total reflection, just total reflection". Tee replied.

Explain Tee's total reflection in the context of the refraction of light.

The math:
Pj Problem of Interest is of type motion (linear). The ray model of light implies linear motion of light.

The phenomenon of total reflection is associated with refraction (bending of light), which is basically, the change in direction of light as it passes from one medium to another.

Consider figure 21.3, the ray of light originating in air bends towards the line perpendicular to the surface of water, on entering water. The ray makes an angle r, called the angle of refraction, with the perpendicular in water. The ancient thinkers of Alexandria in Egypt, Ptolemy in particular, observed this behaviour of light very early on in their study of light. They were curious about the relationship between the angle of incidence and the angle of refraction. They observed that:
(1) The angle r increased when the angle i increased, but not in a simple pattern.
(2) If the angle i is constant, the angle r varies with different refracting medium. In order words, if the medium in which the ray originates is air, then for the same angle i, the value of angle r for glass would be different from that for water. Ptolemy's work on refraction enabled mathematician Willebrord Snelluis(aka Snell 1580-1626) and mathematician Renee Descartes (1596-1650) to formulate the law of refraction.

This scenario is illustrated in figure 21.4(a). The ray SO is assumed to be from the Sun at the horizon. It enters a large body of water at close to 90 degrees. Hence its angle of refraction is approximately 49 degrees. For entities like fish without the knowledge of the refractive property of light, their visual perception from water of objects in the air medium is restricted within the cone as illustrated in figure 21.4(a). The line of vision of such entities from a point P in the water in figure 21.4(b) will follow the line PP' and they will be unaware that the actual object is at N. This notion that all objects above water must be within the 49 degrees-cone around the perpendicular is known as the fish-eye view of the world.

Now suppose the ratio v1/v2 < 1. This is the case where the medium in which the light ray is refracted is less dense than the medium from which the ray originated, for example, a light ray that originates from water and is refracted in air. Figure 21.5(a) is an illustration of this scenario. Notice that the ray is refracted away from the perpendicular. In other words, the angle of refraction r is greater than the angle of incidence i.
Suppose the angle of incidence is 60 degrees (figure 21.5(b)). By equation 1, we have:
sinr =(4/3)(sin60) = (4/3)(0.8660)= 1.155., where v1/v2 = 3/4 (ratio of velocity of light in water to velocity of light in air)
But no angle has its sine value greater than 1. So some other phenomenon is at play. What happened is that the ray did not leave the water so there is no angle of refraction. Instead, the ray was reflected at an angle of reflection equal to the angle of incidence which in this case is 60 degrees. This phenomenon is called Total Reflection.

In general, total reflection occurs if light seeks to pass from one medium to another in which the velocity is greater, and at an angle of incidence greater that a certain angle called the critical angle (49 degrees for water and air). This critical angle is the maximum angle for which refraction is possible. Total reflection implies that a surface (water in our example) can serve as a mirror for some angles of incidence.
The phenomenon of total reflection is used to solve a number of visual problems in real life. It is the concept used by Tee to make her periscope.

Consider figure 21.6(a) which is an illustration of an arrangement of two isosceles right-angled prisms made of glass with the faces BC and B'C' parallel to each other. A light ray OP strikes the face AB perpendicularly and moves straight on in the same direction to strike the face AC because its angle of incidence is zero and there is no refraction on striking the face AB. Its angle of incidence at P on the face of AC is 45 degrees. If the prism is made of flint glass, the critical angle is 37 degrees. So there is total reflection on the surface AC and the angle of reflection is 45 degrees in the direction of PQ. The reflected ray strikes the faces BC and B'C' perpendicularly therefore there is no change in direction. It then goes on to strike the face B'A' at 45 degrees and since this angle of incidence is greater than the critical angle, there is again total reflection with an angle of reflection of 45 degrees in the direction of RO'. The reflected ray strikes the face B'A' perpendicularly and maintains the same direction without refraction. Consequently, the final ray, RO', has the same direction as the original ray, OP, but is displaced by the distance PR.

The periscope is made using the phenomenon of total reflection in the prisms arrangement of figure 21.6(a). The two prisms are at opposite ends of a long vertical tube. The ray OP is the light received above water and the ray RO' is the light received below. The use of prisms is preferred over silvered mirrors because of their longevity and their capacity to reflect almost all the light that strikes a face such as AC (a silvered mirror reflects only about 70%). The binoculars is another instrument that uses the phenomenon of total reflection and the same arrangement of prisms.

The most common use of the refractive property of light is in lenses. Consider figure 21.6(b). Some light rays from an object at Q will strike the lens at points R1, R2, and R3. The rays will be refracted as they enter glass in the directions R1S1,R2S2 and R3S3 respectively. The rays will bend again as they leave the glass medium into the air medium at points S1, S2, and S3. By properly shaping the right and left surfaces of the lens the light from Q can be concentrated at T. Lenses of this type are contained in all optical instruments susch as the telescopes, microscopes, binoculars and cameras.