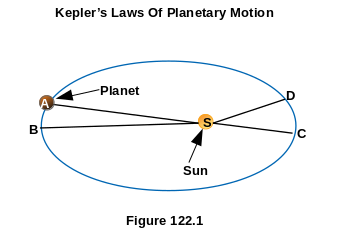 planet A revolves around the Sun, S (figure 122.1):
(a) Describe its path around the sun.
(b) Is the velocity of A constant throughout its revolution around the sun?
(c) Relate the period of A's revolution to its mean distance from the sun.

The math:
Pj Problem of Interest is of type motion (rotation).

(a) A's path is elliptic.
Kepler's First Law: each planet moves on an ellipse and the sun is at one focus.

(b) No. Planet A does not move at constant velocity around the sun. It moves faster when closer to the sun. This is a consequence of Kepler's second law.
Kepler's Second Law: a line drawn from the sun to the planet sweeps out equal areas in equal times. Area ABS is equal to area SCD in equal times (figure122.1). So arc CD is longer than arc AB.