Derivation Of The One Dimensional Wave Equation 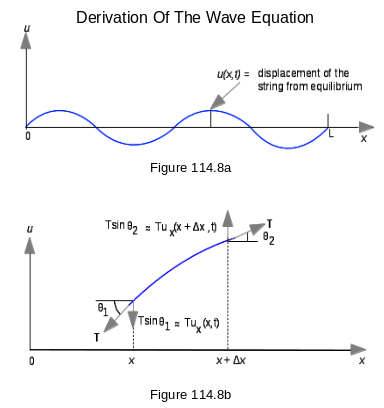 Show that the transverse vibrations of a string of length L (figure 114.8a) fastened at each end can be described mathemathecally by equation (1).

The math:
Pj Problem of Interest is of type motion (oscillatory).

Important forces acting on the string:
(1) Net force due to the tension in the string = T ( figure 114.8b)
T has a tension component which has a net transverse force on the small subregion of the string as follows:
Tension component = Tsinθ2 - Tsinθ1
= ≈ T[∂u(x + Δx,t)/∂x - ∂u(x,t)/∂x]

(3) Frictional force (- β∂u(x,t)/∂t))
This is a resistance force from the medium in which the string is vibrating at a velocity of ∂u(x,t)/∂t).

Equation (4) intuitively infer that the acceleration of each point of the string is due to the tension in the string. The larger the concativity (uxx), the stronger the force (where α2 = T/ρ is the proportionality constant).