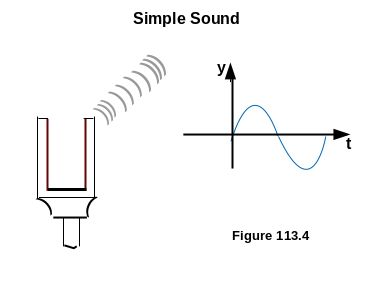 (b) Sounds from musical instruments and the human voice are complex sounds so they are not representable by only the simple sinusoid of equation (1). However, intelligible sounds (simple or complex) are periodic even if they are not sinusoids. Consider the following complex sound:
y = 0.07sin480πt + 0.05sin760πt + ... -------------(2)
(i) What are the frequencies of the fundamental, first harmonic and first partial?
(ii) What is the frequency of the second harmonic?
(iii) Why is the frequency of a complex sound always that of the first harmonic?
(iv) What is the difference between natural frequency (resonant frequency) and fundamental frequency?
(v) Can humans hear an infrasonic or an ultrasonic sound?

The math:
Pj Problem of Interest is of type motion (oscillatory).

(iii) The cycles of the overtones are contained within the cycle of the fundamental tone.