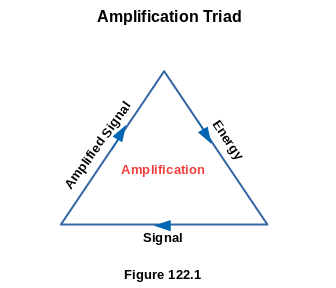 A signal is amplified when it is strengthened by the application of energy. Humans often amplify electrical and electronic signals for various reasons. Sound and light signals are some signals in nature often amplified by humans. The concept of amplification is ubiquitious in Nature. In fact growth is amplification.

(a) A seed is planted and eventually grows into a tree. Identify the components of the amplification-triad for the planting: the signal, the applied energy and the amplified signal.

(b) A nation is founded and eventually grows into a great nation. Identify the components of the amplification-triad for the nation: the signal, the applied energy and the amplified signal.

The math:
Pj Problem of Interest is of type change (physical change). There are also many instances of amplifications that are chemical changes.

The broad amplification context presented here is based on the following broad definition of signals: a signal is any entity in space to which a meaning has been mapped. In other words, if it exists in space and has meaning, it is a signal. For example, a name is a signal and the individual to whom the name has been assigned is also a signal.