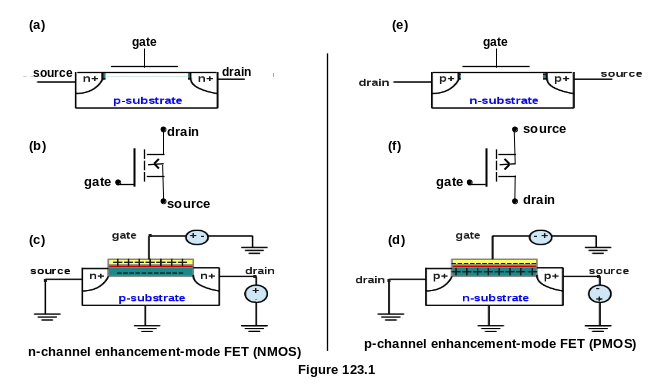 (a) Explain the conduction state of the NMOS (figure 123.1c).
(b) Define the following terms: Threshold Voltage, Conductance Parameter, Early Voltage.
(c) Name and characterize the three operating regions of the NMOS transistor.

(a)The NMOS has three terminals: gate (similar to the BJT base), drain (similar to the collector), and the source (similar to the emitter).
It has a p-material substrate (or bulk) electrically connected to the source. So the substrate does not appear as a separate terminal in circuit diagram.
The gate consists of a metal film separated from the p-substrate by a thin oxide layer (hence called metal oxide semiconductor).
both drain and source are made of n+ material.

Consider figure 123.1c. Without the voltage supply connected to the gate, no current will flow in the NMOS since all junctions are reverse-biased. This is the normal off state of the NMOS.
When a positive voltage is applied to the gate, electric field is created (hence called field-effect). The field repels positive charges away from the surface of the p-substrate. Consequently a narrow channel (green in diagram) consisting of negative charges that are available for conduction, is formed near the surface of the p-substrate.
The higher the gate voltage (enhancement), the higher the concentration of the negative charges, so the higher the conductivity.

(b) Threshold Voltage (VT): the positive voltage that must be exceeded by the gate voltage in order to form a conducting channel in the NMOS. In other words, NMOS is on if gate voltage > VT. It is off otherwise.
Conductance Parameter (K) : ability of the channel to conduct. Expressed as a formula as follows:
K = (WμCox)/2L.
W = width of channel; L = length of channel; μ = mobility of charge carrier (electrons in nmos, holes in pmos); Cox = capacitance of oxide layer.
Early Voltage (VA): describes the dependence of MOSFET drain current to drain-source voltage (vDS). Usually assume to approach infinity to indicate the drain current is independent of vDS.

Saturation Region: gate-source voltage, vGS > VT, and gate-drain voltage, vGD <VT.
Channel is on at the source and off at the drain.
drain current iD almost independent of drain-source voltage (vDS) and depends on only the gate voltage.
iD = K(vGS - VT)2(1 + vDS/VA)
iD = K(vGS - VT)2. If VA is assumed to be very large.
MOSFET behaves like a voltage-controlled current source.