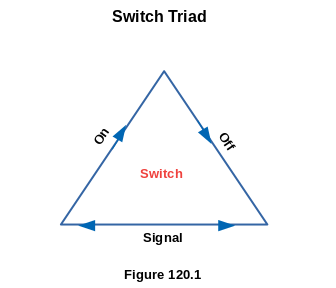 Switches are everywhere. The electrical and electronic push-buttons and clicks are familiar switches. However, there are many other switches that do important work but are usually not perceived as switches.

1. Switches in codes: identify the nature of the signal and the binary states (on and off) of the switche(s) in the following simple code:

2. The on and off states in doors and gates is easy to identify. Door opens (on). Door closes (off). The signal can be any entity that is allowed to go through the door or gate. The concept of gates is a fundamental concept in integrated circuit design. Smart people have been able to produce very impressive results by assembling numerous electronic gates based on defined values for voltage on and voltage off.

3. The eye-lids. Eye-lids opens (on). Eye-lids close (off). The signal is light. There are other biological switches at play in the cell cycle. The cell cycle is the ordered sequencial events that controls how a single cell divides.