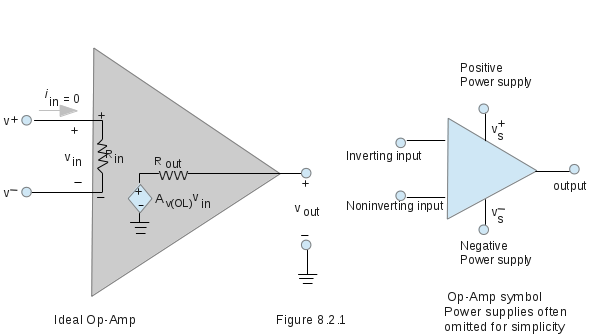 The math:
Pj Problem of Interest is of type change (change - physical). 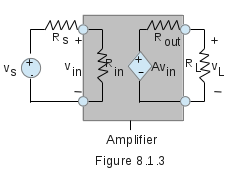 (a) An amplifier (figure 8.1.3) is an electronic device use to amplify low level electric signals (e.g. voltage and currents). For example, the sound produced by a loud speaker is the result of amplication. Basically an ideal amplifier recieves a signal vs(t) and outputs a signal:
vo(t)= Avs(t) (also called the load voltage)-------(1)
Where A is called the gain of the amplifier.
An operational amplifier (op-amp) is an integrated circuit (an aggregation of many electronic and electric circuits on a wafer of a semi-conductor such as silicon). The op-amp amplifies the difference between two input signals. In figure 8.1, vd is the difference signal. The relationship between the difference voltage that is input and the output voltage is as follows:
vo = AOLvd-------(2)
Where AOL is called the open-loop gain.

(c) The inverting op-amp (output signal is inverted) of figure 8.2 is closed looped. That is, output signal is fedbacked as input. This is why iF is called the feed back current.

(d) An op-amp is ideal if it satifies the following characteristics:
- The open-loop voltage gain is negatively infinite.
- The input current iinm = 0 which implies input impedance Rin is infinitely large.
- The output impedance R0 = 0, which implies the output voltage is independent of the load. 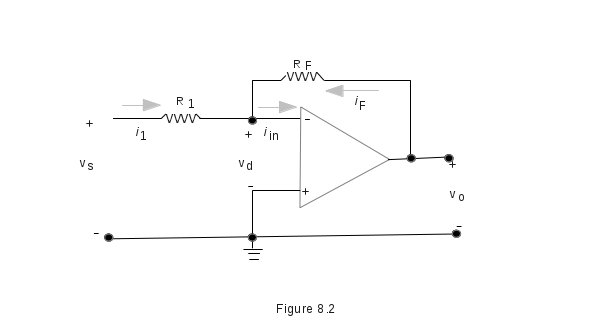