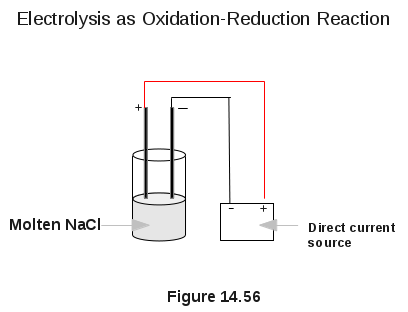 Figure 14.56 is a simple conceptual illustration of the electrolytic decomposition of molten sodium chloride.
(a) Describe the half-reactions of the chemical reaction then derive arithmetically, the whole oxidation-reduction reaction from the half-reactions.

(b) Using Faraday's Law of electrolysis, calculate the amount of Chlorine (in grams), a chemist could produced from molten sodium chloride (NaCl) if she uses a current of 1 ampere for 5 minutes?

The math:
Pj Problem of Interest is of type change (chemical change).

(a) Electrolysis is the use of electric current to cause a chemical reaction. The basic set-up (figure 14.56) is called an electrolytic cell. It consists of a voltage source connected to two electrodes immersed in a chemical substance. One of the electrodes, called the cathode, is negatively charged. The other, called the anode is positively charged. The substancce in which the electrodes are immersed is a solution or molten form of an electrolyte. An electrolyte is a substance whose aqueous solution conducts electricity. The conduction (called electrolytic conduction) that occurs in an electrolytic cell is due to the movement of positive ions (cations) and negative ions (anions) in the molten electrolyte. The cations are attracted to the cathode while the anions are attracted to the anode. In the electrolytic cell given in figure 14.56, the cations are sodium ions while the anions are chloride ions. So, the electrodes used must not react chemically with sodium or chloride ions.

The half-reactions are the reactions occuring at the electrodes:

The half-reactions at the cathode and anode do not occur independently. So, they must be combine to get the whole oxidation-reduction reaction as follows:
reaction (1) is multiplied by 2 and added to reaction (2)

(b) Michael Faraday's (1791-1867 A.D) law of electrolysis relates the mass of substance produced at either eletrode during electrolysis to the amount of electricity used (expressed in Coulombs). The formula is as follows: