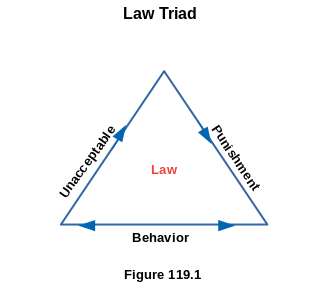 (b) Natural laws are fixed. However, they can be manipulated by humans. The Law Triad applies in such scenarios because of the incorporation of human behavior. For example, certain aspects of genetic engineering.

(c) Our animal cousins in the jungle have less laws so one can speculate that they are in general better behaved.

(e) The rule of law often associated with a free democratic space means that no one is above the law. In the context of the Law Triad, it means that unacceptable behaviors subject to the law is punishable regardless of social status. However, this is not always true because although the law rules, humans implement the rule. A rule is only as effective as those who implement the rule.